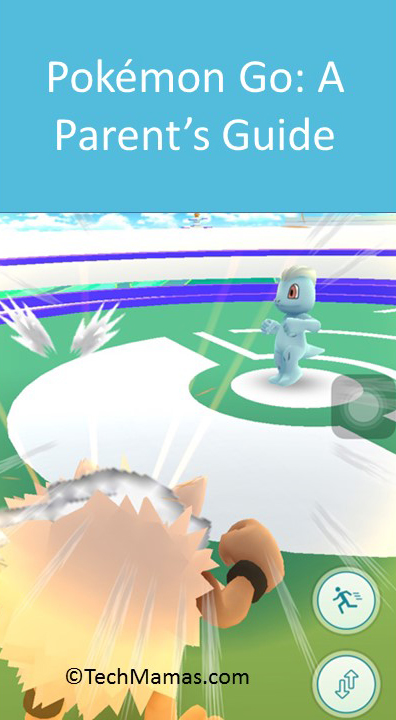 What started out as a nice walk between my son and I a few days ago ended up being an important discussion on Internet and gaming safety. My son kept looking at his phone and I asked him why! We usually have a no screen time when there is family time rule. What was taking his attention and making him risk breaking the no screen time rule? It was a new mobile game/app, that unless you have unplugged completely from all technology and news, everyone has heard about: Pokémon Go.

What is Pokémon Go?

Pokémon Go is a augmented reality game using a smartphone (camera + GPS) where players use motion forward, such as walking, to move their avatar in the game and catch “Pokémon” as you go.  Poke stops are small landmarks in the real world that are noted in game with a sign (like the entrance to tennis court). By swiping to either side of screen and making the sign spin, you can receive items such as Poke balls, Pokémon eggs and potions. To hatch Pokémon eggs you have to walk or bike a certain distance in real life. The game uses 2, 5 and 10 Kilometers. The concept is fun, family friendly, the battles are cartoon “Pokémon” style battles.  It is a fun game that takes kids (and adult) outside or one that they can play on the move.  Players look for PokéStops and Pokémon gyms which are usually at meeting places and attractions.  While the game is *free*, there is in-app purchases that parents need to be aware of. The game was developed by Niantic labs with the Pokemon Company and Nintendo. Niantic’s CEO said the goals of the game were to inspire “exercise, see the world in new eyes and break the ice“.

Here is an example of what the avatar screen looks like before a gym battle: 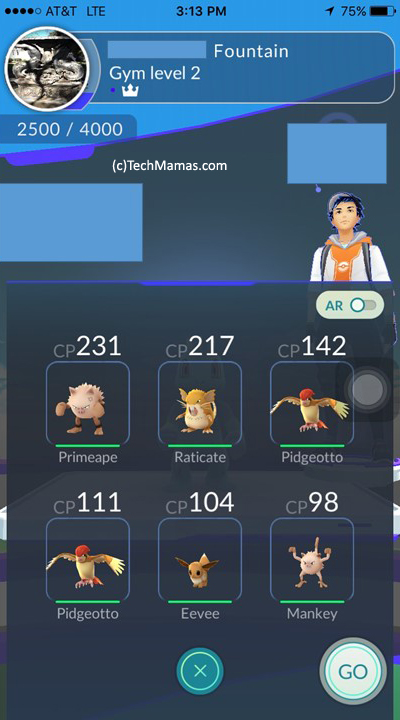 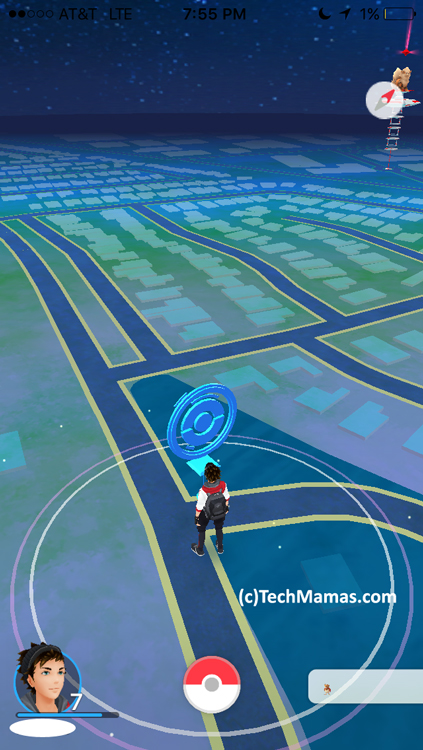 And Poke balls in augmented reality to park! 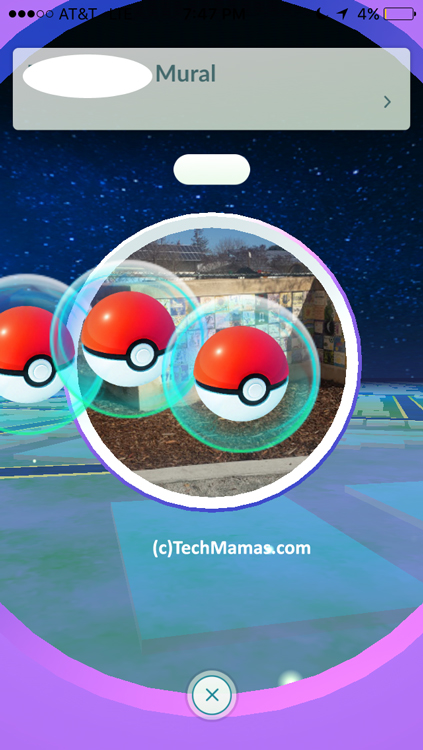 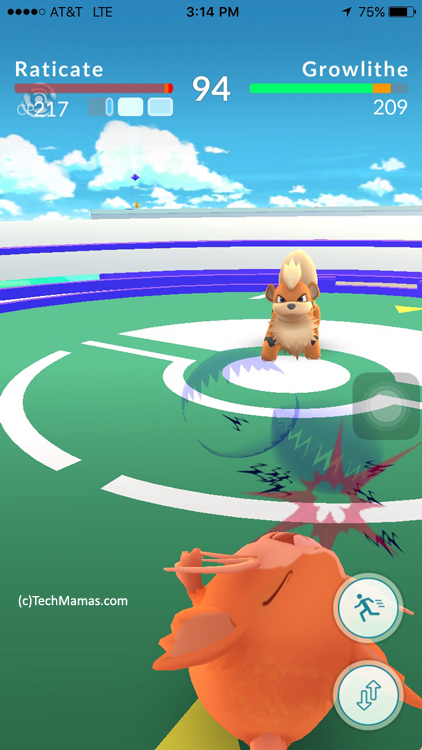 Here is the description from the Pokémon website: “Travel between the real world and the virtual world of Pokémon with Pokémon GO for iPhone and Android devices. With Pokémon GO, you’ll discover Pokémon in a whole new world—your own! Pokémon GO is built on Niantic’s Real World Gaming Platform and will use real locations to encourage players to search far and wide in the real world to discover Pokémon. Pokémon GO allows you to find and catch more than a hundred species of Pokémon as you explore your surroundings. The Pokémon video game series has used real-world locations such as the Hokkaido and Kanto regions of Japan, New York, and Paris as inspiration for the fantasy settings in which its games take place. In Pokémon GO, the real world will be the setting! Get on your feet and step outside to find and catch wild Pokémon. Explore cities and towns around where you live and even around the globe to capture as many Pokémon as you can. As you move around, your smartphone will vibrate to let you know you’re near a Pokémon. Once you’ve encountered a Pokémon, take aim on your smartphone’s touch screen and throw a Poké Ball to catch it. Be careful when you try to catch it, or it might run away! Also look for PokéStops located at interesting places, such as public art installations, historical markers, and monuments, where you can collect more Poké Balls and other items.”

Along with in app purchases, here are some other things parents need to not only be aware of, but set up safety and privacy rules for Pokémon Go:

The warning screen on Pokemon Go: 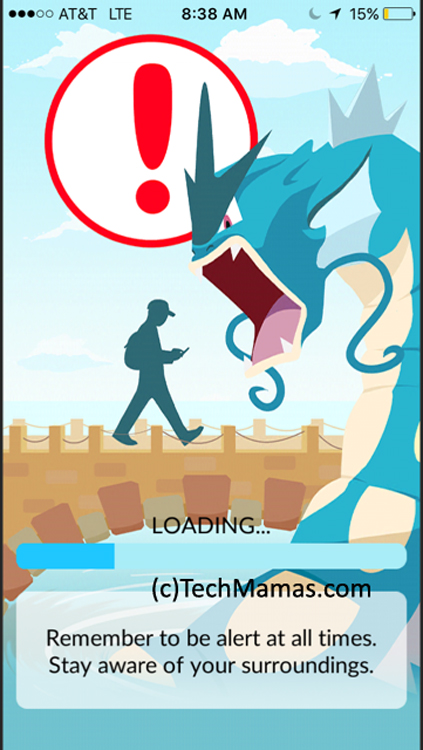 Is Pokemon Go improving our cities? via Curbed.

Yes, you can search for PokéStops via YELP! “How Yelp Is Helping Feed Our Pokémon Go Appetites” via Refinery 29

5 THINGS YOU REALLY NEED TO KNOW ABOUT POKÉMON GO! via Wonder and Company

You Should Probably Check Your Pokémon Go Privacy Settings via Buzzfeed

3 Ways Your Business Can Benefit from Pokemon GO. And yes, you knew it was coming. Pokemon Go will soon be adding sponsored locations.

And one other amazing detail “On July 7, one day after its release, Pokémon Go had more Android installations than Tinder in US, and by July 8 it was on 5.16% of US Android devices” via Techmeme.

Oh, and moms are playing Pokémon Go too.. To find things that is (video via MyLifeSuckers).


Other  moms are playing the “Chardonnay Go” version.. Hmmm…

Have you played Pokémon Go? And if so, what do you think? I am still learning about the game so I would love to learn more from my readers! I have seen many kids and adults enjoy using the game outside with friends so that is positive aspect. Lately there are articles about the health benefits of Pokemon Go.   As long as you watch out for some of the issues, I think the game can be a fun and social game for “kids” of all ages. Many parents are reporting to me that they have enjoyed not only going on long walks playing the game with their kids, but also meeting other people in their neighborhood playing the game as well. So there is a very positive side of the game!

Disclosure: This is a press post. I will be updating the links as I find out more information.