This post is sponsored by Samsung. All thoughts and opinions are my own. 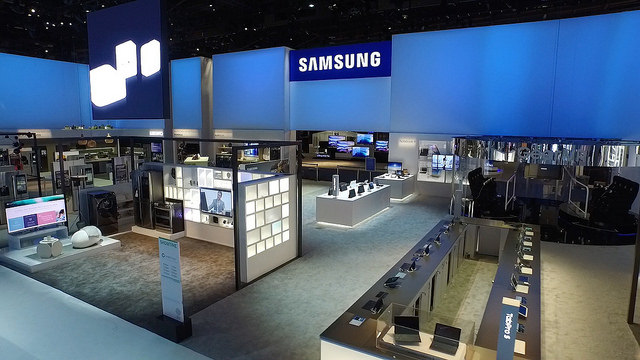 VR (Virtual Reality) was one of the hottest trends at CES 2016, witnessed by the long lines to demo the headsets. 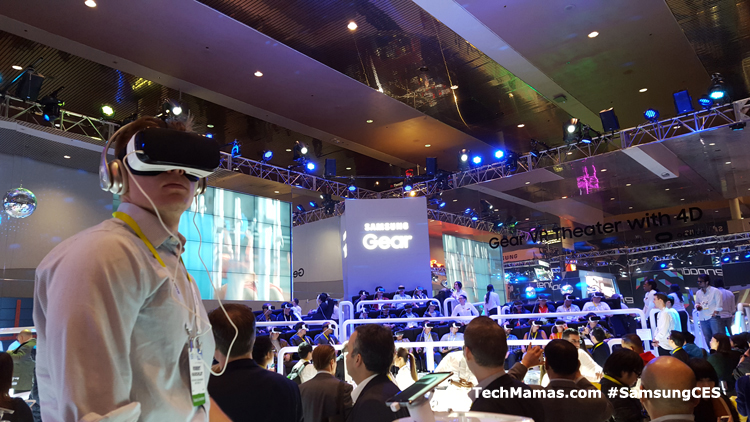 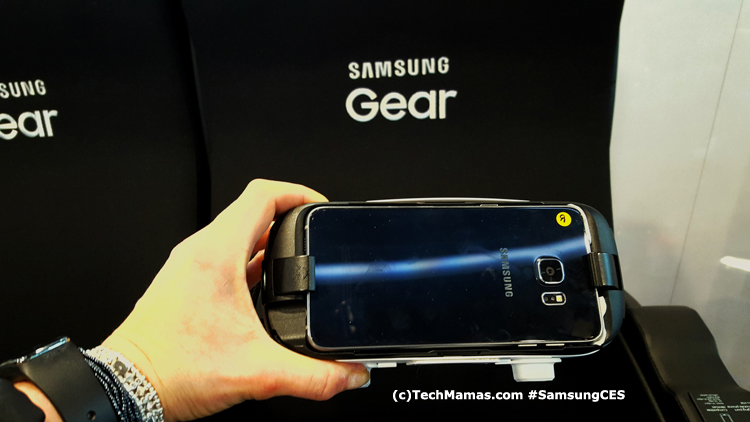 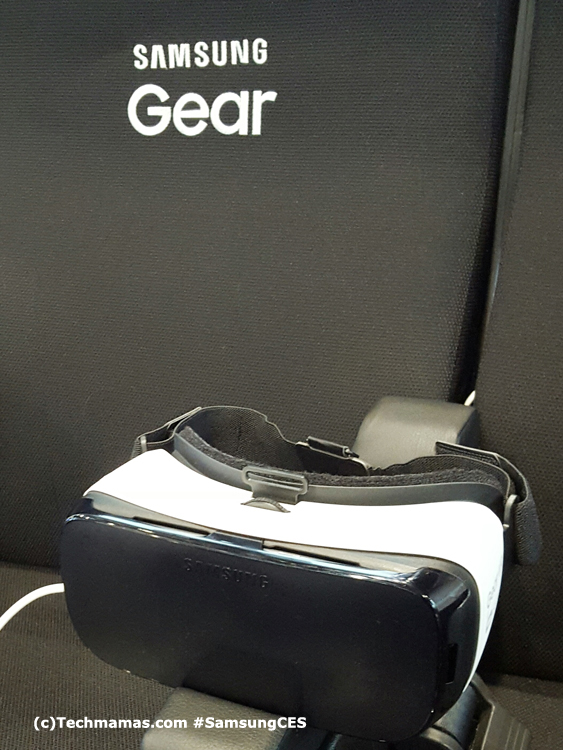 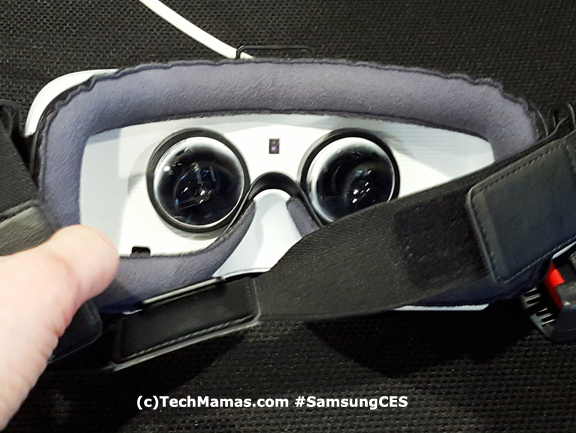 Samsung also announced their Samsung Internet for Gear VR virtual reality service and strengthened VR content ecosystem. This new browser will allow users to browse the without having to download content onto their smartphones. Some of the specifications include Optical Lens (96˚ Field of View), Sensors (Accelerator, Gyrometer, Geomagnetic, Proximity),  Focal Adjustment (Covers Nearsighted / Farsighted Eyes), Physical User Interface (Touch Pad, Back Button, Volume Key), microUSB, 3D Spatial Sound on Samsung VR Player for VR Gallery contents (Earphone needed)  and content available through the Oculus Store.  One of the games I look forward to trying with my boys is VR Kart racing game, concept experiences and even Minecraft on Oculus!

“Samsung is leveraging its leadership in mobile, by giving millions of Samsung Galaxy smartphone owners’ access to amazing virtual reality experiences including immersive games, the ability to explore beautiful photographs and exciting videos in 360 degrees, and much more,” said Nick DiCarlo, Vice President, Immersive Products and Virtual Reality at Samsung Electronics America. “The quality of the VR experience provided by Galaxy smartphones and Oculus software is unparalleled, taking virtual reality out of the early adopter space and into the mainstream with this revolutionary product.”

I have the older version of the Samsung Gear (watch on the right) that I purchased and used as my everyday watch, for fitness, notifications and more. When I saw the new Samsung Gear S2  (watch on the left) at CES, I was excited because the new version takes smartwatches to a new level – a design that looks like a stylish watch with new features and apps. 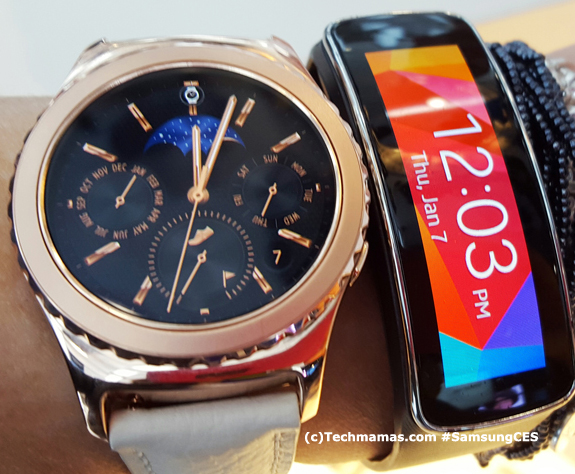 As a business person on the go, having a smartwatch like that would give me a greater ability to multi-task while having all of my information on my wrist! I also appreciate that my mobile tools can have stylish options.

The new watchband options including leather, different colors including a beautiful 18K Rose Gold color and Platinum for the sleek modern look. 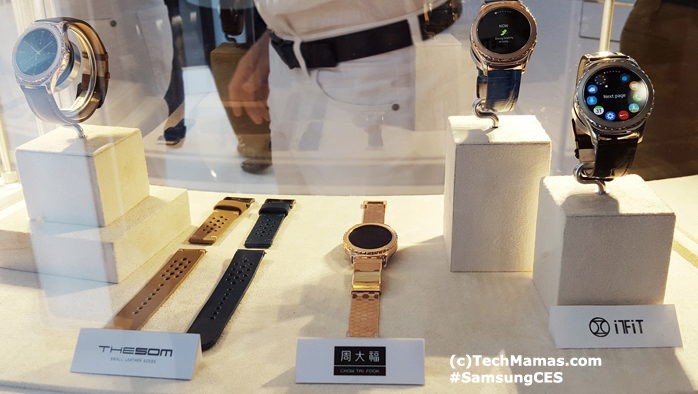 This blue Samsung Gear S2 watchband is one of my favorites! 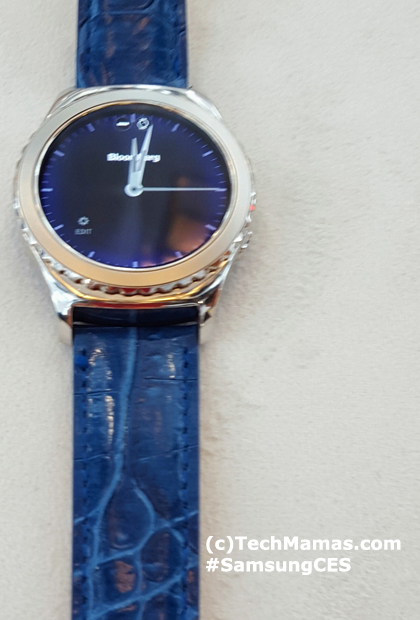 The updated faces to provide a more personalized experience, new apps such as CNN, Bloomberg, eBay, ESPN, Uber and an expanded ecosystem of apps on news, health, traffic, banking and music. I am sure there will be many more new apps coming down the pipeline, Samsung launched its Tizen Software Development Kit for the Gear S2 so that developers can create standalone apps and expand the smartwatch’s capabilities. 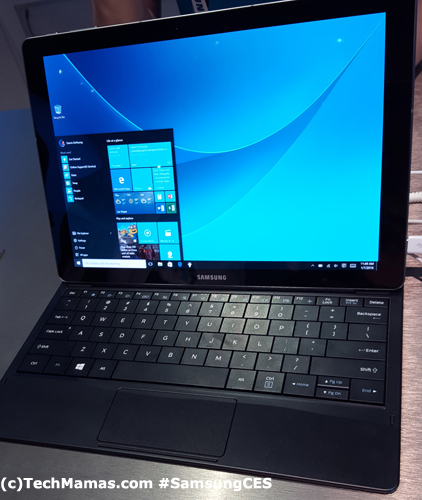 We also saw a demo of the sleek new Windows 10 (Home or Pro) Samsung Galaxy TabPro S which is only is only 6.3 millimeters thin, weighs only 693 grams, has a full sized keyboard cover, flexible hinge for dual angle viewing, a touchpad to emulate the controls of a PC, a 12-inch AMOLED display and the latest generation Intel Core M processor. To maximize mobile experience the Galaxy TabPro S supports the faster LTE Cat 6, can fully charge in 2.5 hours and offers up to 10.5 hours of battery life. This tablet would be light and small enough to fit in most mobile bags but also pack the power of having a PC to get work done. There is a multi-port adapter to connect to external devices (HDMI, USB Type A &C) and a Bluetooth Pen for writing (purchased separately). The 5MP front and back cameras and sensors offer photo and gaming features. 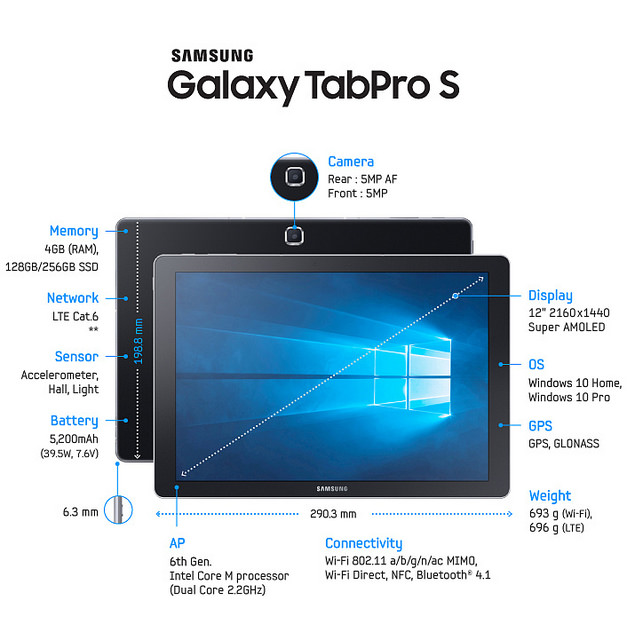 “Galaxy TabPro S balances the best of Samsung’s Galaxy Tab with the wealth of features on the Windows 10 operating system for the most advanced tablet experience on the market,” said Dongjin Ko, President and Head of Mobile Communications Business at Samsung Electronics. “We’re thrilled to be working with Microsoft Corp. to deliver a 2-in-1 tablet that truly allows people to enjoy productivity and connections that matter most, through a seamless mobile station designed for all purposes.” 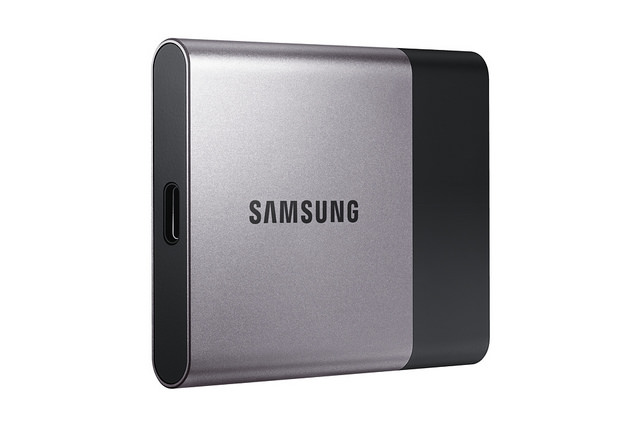 With all of the new high resolution (such as 4K) content being created and consumed, there is a greater need to have portable storage. At CES, Samsung announced their new external and Portable SSD T3.   The T3 is not only palm sized but also has storage capacities of 250GB/500GB/1TB/2TB.  I use high-resolution photos and videos for my website, so it can get very tricky to transfer or keep an extra copy with me for mobile use.  When filming or taking photos for a project, I also like to make onsite backups so this storage would have the speed and storage capacity to enable that.  The AES 256-bit hardware encryption offers security to protect my data.

While Internet of Things (IoT) may be one of the hottest trends connecting the cloud to multiple devices and systems, one key issue is security.   At CES 2016, Samsung discussed their KNOX smart security solution that provides hardwired protection into devices and appliances as well as smart mobility apps for mobile devices. For example, KNOX will be used to security Samsung’s 2016 Smart TV’s and into a range of devices, services, and platforms. I saw a demo of Samsung Pay that uses ses tokenization, Samsung KNOX, and fingerprint authentication to provide secure payments 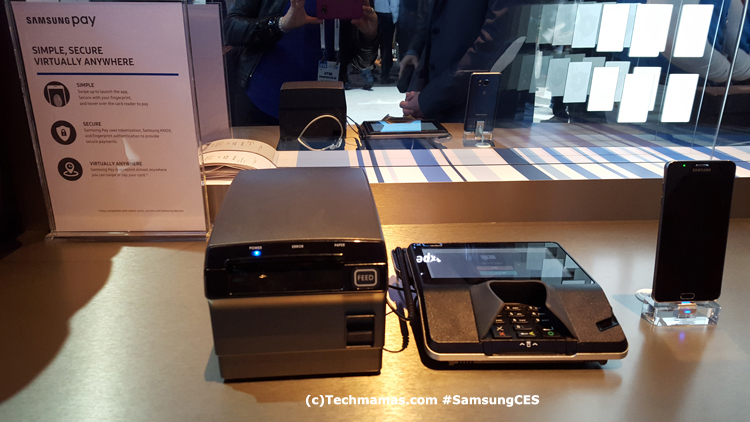 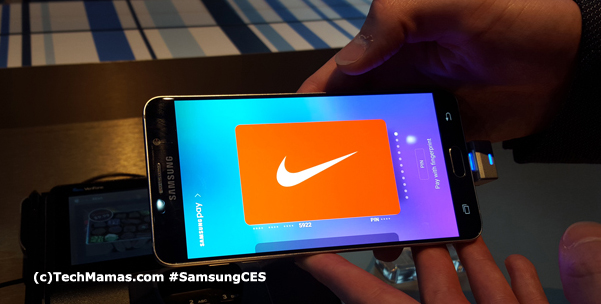 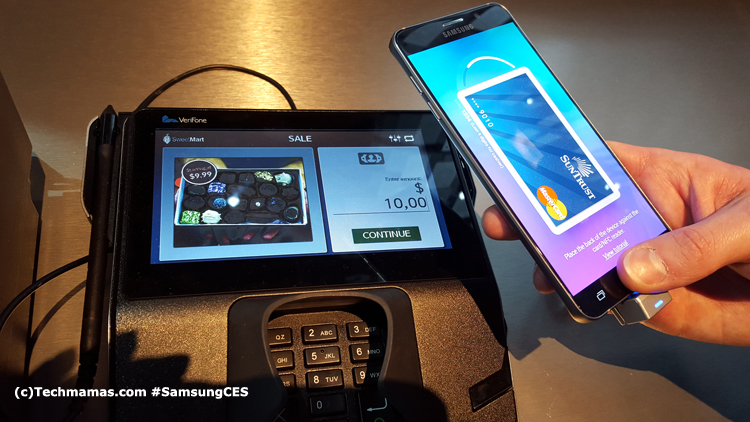 Samsung Pay allows you to pay anywhere you can swipe or tap your current credit cards.  Retailers do not need to change their equipment because Samsung Pay can interact with card scanners. Samsung Pay also added 19 new Mastercard and Visa issuers and the ability to purchase, use and share gift cards using Samsung Pay.  With the security available with Samsung Pay, I think it is time I got rid of all of my plastic and streamlined my payments onto my (recently purchased) Samsung S6. It would be much more efficient to scan gift cards to my phone then trying to carry them around, most of the time I lose them before I can use them! 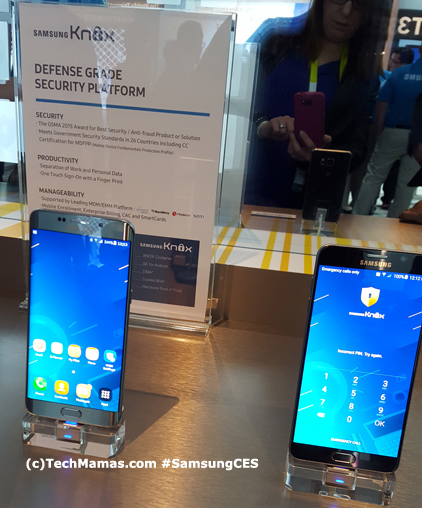 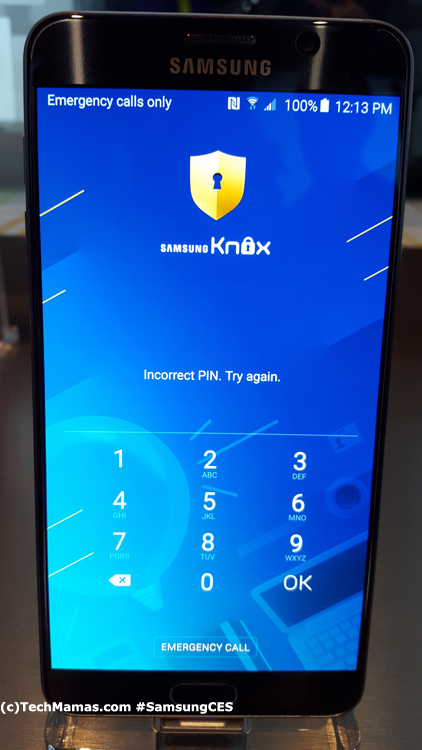 After the CES demo of the Samsung Knox app, I decided to load it to update my mobile protection and privacy. With mobile phones being used beyond social and entertainment, securing work, payment and other private information is important. Samsung My KNOX creates “a separate, secure environment on your device for all your work-related data, ensuring it doesn’t mix with your personal data” and also allows you to remotely manage your device.

What CES trends were you interested to hear about?