When it comes to listening to music or watching shows, I always appreciate immersive audio experiences. Dolby technology enables audio experiences that are used by Filmakers and movie theaters, home theater audio setups , PC and mobile audio tech and audio conferencing at work.  One key technology I enjoy is Dolby Atmos, which enables sounds to be specifically placed and moved in a 3 dimensional space. Recently when our family saw The Fantastic Four in a theater with Dolby Atmos, we all commented that we felt like they were part of the action.  I left somewhat disappointed I did not have a superpower in real life…But what really fascinates me about Dolby is their commitment to audio research, evidenced by the more then 100 labs and more then 750 employees in their new San Francisco headquarters – including everyone from Neuroscientists, Sound Engineers to high tech artists.  To celebrate the opening of the new location, Dolby invited press to take a tour. Here are some of the things that I found most interesting:

One of Dolby’s Senior Scientists is the inspirational Poppy Crum (great to see a fellow #women in #tech!).  She gave us a tour of a lab that studies senses in a natural way with high tech speakers and an 8 foot screen that displays high resolution images. That allows the lab to tests sounds such as the experience of standing in the middle of Carnegie Hall! Dolby actually sends out teams to record video and audio in locations such as Carnegie Hall. Then they bring that back to the lab to recreate that experience. 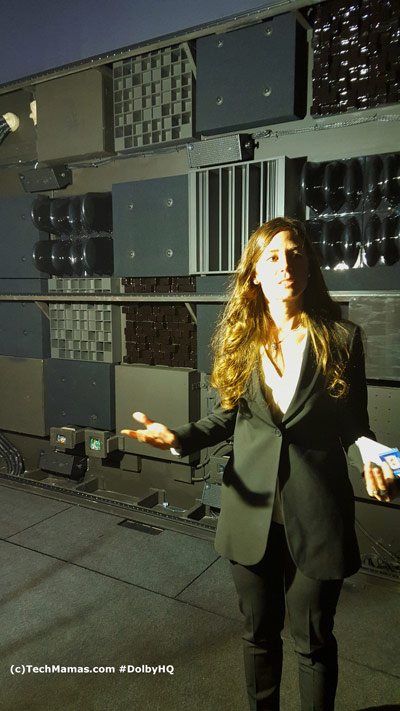 The new Dolby headquarters has mixing rooms for work in Dolby Audio, Dolby Atmos and Dolby Vision. They wired the labs so that workstations in other locations in the office can test out sound. 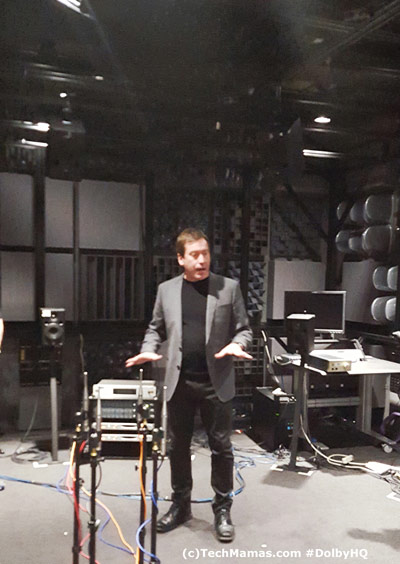 There are also labs that research human perception, sensory immersion and other fields. This lab uses a sensory cap to capture biophysical responses. 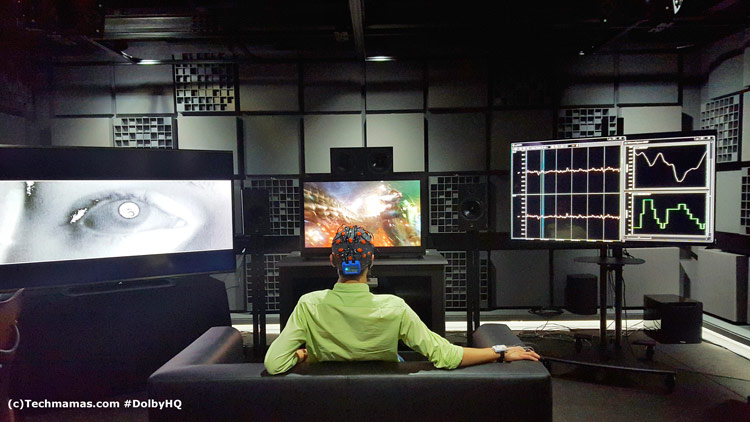 The living room and small cinema theatre rooms are set up to mimic real-world environments. 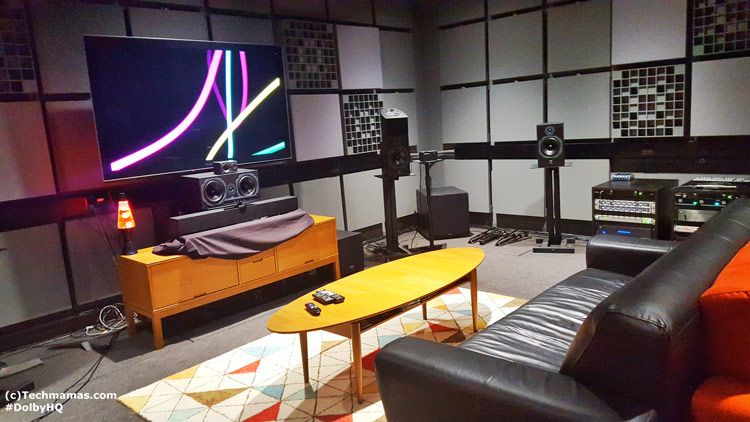 Dolby collaborated with twenty artists to create installations in their new headquarters that reflect their interpretations of sight and sound and Dolby’s history and technology.  Of course one of the art pieces had to have ears in it! That piece is called “Ears” created by Nikki Starz as a “pop-art  homage” to the people at Dolby. It featured 600 plastic ears that were each molded and painted individually. When we asked who the original ear model was, they said it was confidential.  But we did notice that whoever the model was, they had very symmetrical ears!

The next art was called “Ray Dolby Quote” by Brett McFadden.  The concept was to express the way an inventor would work on a problem.. trying one concept then another.  The quote from Dolby founder Ray Dolby is “To be an inventor, you have to be willing to live with a sense of uncertainty, to work in this darkness and grope towards an answer, to put up with anxiety about whether there is an answer.” Having three little inventors of my own, I can use this quote as an inspiration. I especially will show that to my teen son who builds computers and was having anxiety troubleshooting why a graphics card blew out while doing some testing. Working through the uncertainty can lead to finding answers, even if that means he needs to do some extra jobs to raise funds to buy a new graphics card!

Another art installation, by Stefan Kjartansson, was inspired by the movie “This is Spinal Tap”. The installation had the word Dolby misspelled to “Dobly” to reference one of the characters in the movie that showed limited knowledge of music by mispronouncing the word saying “Heavy Metal should not be recorded in Dobly”.  Always fun to see when companies can show a sense of humor by highlighting those types of fun pop culture references.

Experiential artist and motion designer Pablo Gnecco created an multi-colored LED art installation called “Moment”. This interactive sculpture “represents the artifacts of an individual’s presence at a particular time and space, centering on the notion of movement and sound, visualized with light and color”.

Dolby shared information about their Dolby Cares program. The program supports educational efforts that inspire the next generation of innovators in science and art and contributes to community needs with company-sponsored volunteer projects such as “Women’s Audio Mission”(advances women and girls in music production and recording artists).

Last we had the chance to attend a cocktail party with some real techies. That was one of the highlights of the night.. 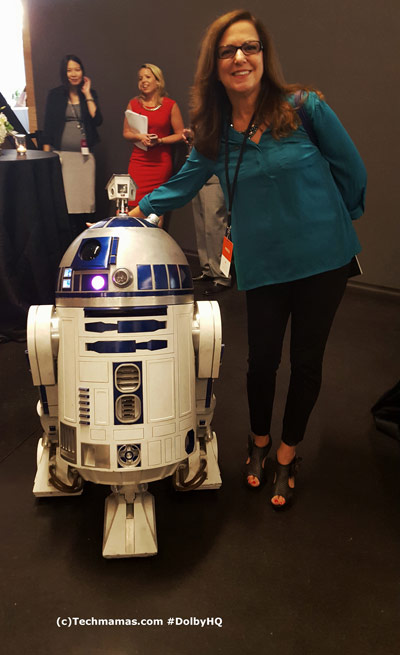 Do you find sound technology research as fascinating as I do? If so, maybe that means that instead of just tech geeks we are also “Audio Geeks”?

“San Francisco has been our home for more than four decades,” said Kevin Yeaman, President and CEO, Dolby Laboratories. “When we decided to build a new, bigger headquarters to accommodate our growth, we took the opportunity to create a space that embodies who we are and what we do and empowers our staff to do their best work. We’re proud to be a member of the San Francisco community and a part of revitalizing Mid-Market. From this neighborhood, we plan to transform audio, video and voice experiences for the world.”

“I’m excited to help dedicate this new chapter in Dolby’s history and celebrate the transformation that is happening in our Central Market neighborhood,” said Mayor Ed Lee. “Dolby is one of San Francisco’s pioneering technology companies, and they have shown their commitment to improve our city and help our residents succeed. I can’t wait to see what they develop next in their innovative new home in the heart of San Francisco.”

Dolby’s new headquarters is a state-of-the-art facility tailored to the needs of Dolby scientists and engineers. More than 100 laboratories encompassing 63,000 square feet help catalyze innovation in science, engineering and production. These spaces include:

The new Dolby headquarters features approximately 300,000 square feet of renovated space to house more than 750 employees and generate new opportunities for focus, exchange of ideas and work/life harmony. The building includes varied collaboration spaces with Dolby® Conference Phones and video conferencing, as well as sit/stand desks, a fitness center, a meditation room, a café and 18,000 square feet of open-air terraces.

Dolby’s new headquarters features 36 art pieces throughout the building that are both inspired by our work and inspiring to our work. Artists were given three principles to guide their process: celebrate Dolby’s past, look toward the future and reflect on Dolby’s globally diverse culture. Each artist created a unique interpretation of this request, working in an artistic medium of choice to create stunning and thought-provoking installations. The installations vary from a literal interpretation of an early Dolby circuit board rendered in neon to an abstract expression of how musicians layer sound and an interactive piece that responds to the movement around it.

Dolby has documented the art installation process on the Dolby Lab Notes blog, and artists have shared their work on social media using #DolbyArt.