While on a hunt for weekend maker activities for my 12 year old twins, I found a site called Camperoo which has weekend STEM workshops for kids. The event we went to was run by the team behind Tinkering Labs, which gives children aged 6-13 “affordable access to packaged Tinkering kits called Catalysts. Each Catalyst includes components, materials and tools that enable unlimited projects and discoveries related to principles in science, technology, engineering and math (STEM)”. My boys and their friend were technology free and happily “tinkering” away for more then 2 hours. My twins and their friend each made a different design that all had moving parts (which is also why it is important for kids to wear safety glasses) . I was thrilled at the Camperoo workshop and how the Tinkering Catalyst kits keep the kids engaged in a STEM related activity.

The very first Catalyst that Tinkering Labs designed, prototyped and tested was “Electric Motors.” They have tested that with kids from the Exploratorium, the Boys and Girls’ Club and Stanford Design School to Girl Scout troops and schools around the San Francisco Bay Area. The activities related to using the Catalyst kit also supports teamwork by allowing kids to work together.

One of my goals of Techmamas was to support small businesses that are creating STEM activities for kids, so I asked Tinkerlabs for information on their crowdfunding campaign and story to share. I was also thrilled to see them bring their kids into the business:  a son of one of the founders made a presentation at the Maker Faire on how to encourage young makers. Tinkering Labs launched their crowdfunding campaign in April 2015 “Bring Tinkering into Your Home & School with Tinkering Labs”. Campaign perks include single Catalysts, multi-packs for use in schools and other groups, and donations to Bay Area schools in need and Boys & Girls Clubs. A percentage of all profits will go to the nonprofit Institute for Applied Tinkering. 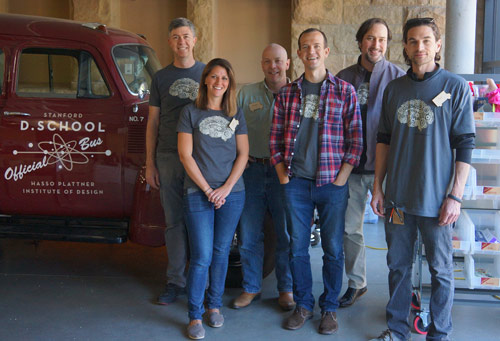 ” In the summer of 2005, my friend Gever Tulley held the first Tinkering School camp at his house south of San Francisco.  He said he wanted to find out what would happen if he gave kids a big challenge, real tools, time to think, work and play, and just enough guidance to prevent serious injury. What could they get done? What would they learn? And how would it change the way they see the world and themselves?

So I volunteered my son Nik. He was the youngest kid there (6 when he arrived at camp, 7 when he came home). None of us had any idea what would happen.

A week later, the answer was stretched across Gever’s property in the form of a functioning roller coaster big enough for an adult to ride on. In the five days it took the kids to build it, they not only experienced a deep sense of accomplishment, but they also picked up some important 21st century life skills. Not just things like how to measure properly and use power tools safely, but skills that will help them face life’s inevitable challenges down the road: teamwork, resilience, creativity and adaptability.

Fast forward 10 years, and I’ve now seen the impact of Tinkering on thousands of kids.  As a board member of Gever’s non-profit, I helped him expand Tinkering School into many new programs and new parts of the country.  The Tinkering activities have taken many forms, but they are always centered around open-ended learning that is goal-directed but unscripted.

Kids need this. But between the electronic devices that mediate much of their experience, schools that emphasize rule following, and even sports and playtime that are organized by adults, many kids are not getting much practice working, playing, and problem-solving independently in the real world. By activating their hands and their minds, Tinkering helps kids develop the skills, knowledge and grit necessary to become the innovators their generation is going to need.

As much as Tinkering School has expanded, it can only reach a fraction of the kids that could benefit from it. So about two years ago I started brainstorming ways to make Tinkering more accessible.  After testing many ideas, I decided the best way would be to develop a series of kits designed to make it easy and affordable to bring real Tinkering to any home or school.
I wanted the kits to have a name that expresses that they are a starting point for kids’ imaginations.  And believe it or not, it was my son Nik, now 16, who came up with the name Catalyst.  So our first kit is called the Tinkering Labs Electric Motors Catalyst.  In November 2014 we started testing it with help from our friends at the Exploratorium, Boys & Girls Club, Stanford, and schools around the Bay Area.  And now we’re launching it with a crowdfunding campaign on Indiegogo.  We’ve already got kits going to 33 countries, and we hope they’ll help create the next generation of innovators.