Please see the bottom of the post for giveaway details (GIVEAWAY CLOSED)! 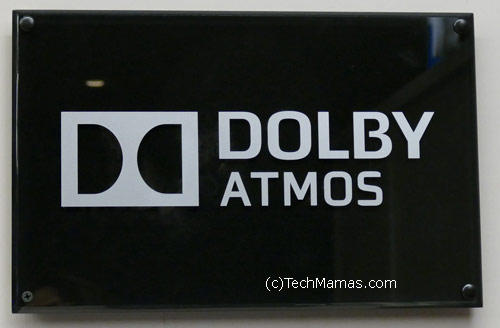 Last Tuesday I not only had the opportunity to attend a preview of the movie “Insurgent” (released Friday, March 20, 2015)  but the location was in the San Francisco office of Dolby Laboratories Inc in their theater set up for Dolby Atmos audio.

My sons and I read the Divergent book series and saw the first movie “Divergent“. Insurgent is the second this great adventure series and has also a top-rate cast that includes Shailene Woodley, Theo James, Miles Teller,  Octavia Spencer, Zoe Kravitz, Naomi Watts, and Kate Winslet.  The Divergent series is an adventure movie with a fascinating premise: there are societal divisions that classify citizens based on their aptitudes and value: Abnegation (the selfless),  Dauntless (the brave),  Erudite (the intelligent),  Amity (the peaceful), Candor (the honest) and also Factionless. There is also a strong female lead (Shailene Woodley) which is always great for my boys to see.

The cinematography captures the adventure with spellbinding graphics. But what really makes the graphics come alive is the Dolby Atmos audio technology, which is part of the audio engineering process of the movie and is played out by the speakers in each theatre. Dolby Atmos creates moving audio with an object-based listening experience. I not only saw the moving train, glass breaking, and other special effects in the movie – I felt like I was there in the middle of the action. Dolby Atmos made the sound come alive!

Here is the Insurgent trailer:

The good news is that Dolby Atmos can be found in theaters all over the country by checking the find a movie theater section. To find other movies that have Dolby Atmos sound, check out the list at the Dolby website.

Here are some fun techie details about Dolby Atmos:

“Dolby Atmos is the first audio format based on audio objects rather than channels. In Dolby Atmos, any sound—the helicopter, a blaring car horn, a yelling child—can exist as an independent audio object, free of channel restrictions. It can be placed and moved anywhere, including anywhere overhead.”

1.  Supports up to 128 simultaneous independent audio objects in a mix for rich, realistic, and breathtaking sound.

2.  Descriptive metadata captures all the director’s intent and provides customized playback for the cinema, home theater, and mobile device.”

At Dolby Laboratories in San Francisco, they have a theater (or lab as they call it) set up with Dolby Atmos. We were thrilled not only to see the movie but to be given a behind the scenes tour of the movie projection area and of the speaker setup in the Theater. The Dolby Atmos system in each theater is controlled in the projector room.

Dolby Atmos speakers are set up in the sides, in this Theater they were actually in the wall panels: 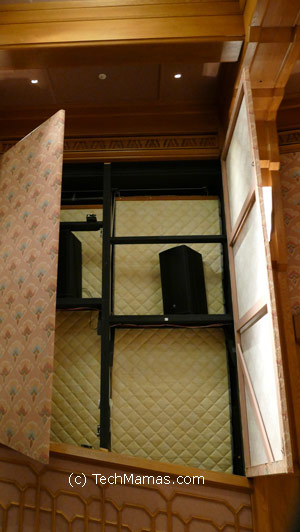 And Dolby Atmos speakers were set up in the ceiling and around the room to provide continuous sound. 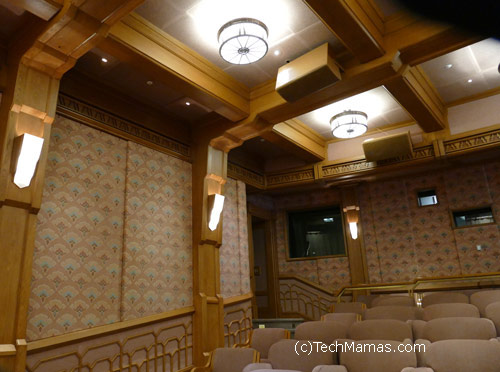 To celebrate the opening of Insurgent, I am doing a giveaway starting March 22 at 6pm and ending March 27 (2015) at 6pm (GIVEAWAY CLOSED). 3 Lucky winners will each win one Insurgent giveaway pack that  includes: 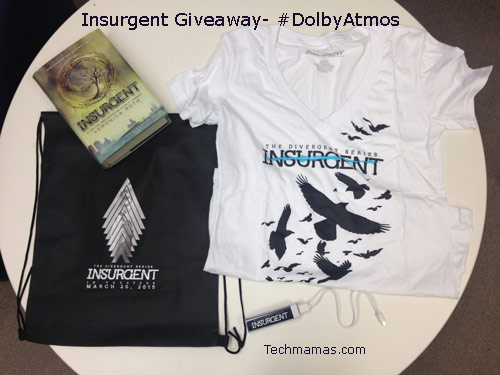 Disclosure: The movie preview was a press event put on by Dolby Laboratories, Inc. This is not a sponsored post.