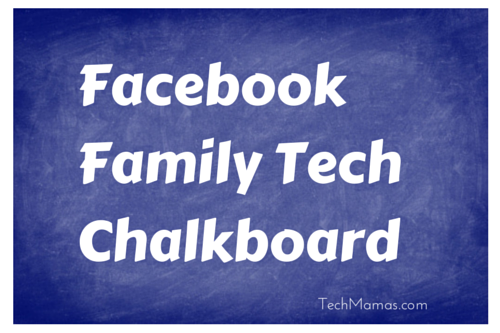 When Facebook reached out to me and other parenting journalists to attend a “Facebook Family Tech Chalkboard” meeting at their campus, I was excited attend a press briefing on their new features.  As parents we have the dual role of using Facebook to communicate with our own friends (and family) as well as advising our teens on topics such as privacy and social media etiquette. Those of us with businesses or websites also use Facebook Pages to engage with our customers or readers.   Listed below is a summary of the topics discussed.

1. Anonymous Login: “An easy way for people to try an app without sharing any of their personal information from Facebook.”

2. Facebook Login: “A new version that gives people the option to pick and choose what information apps get.”
3. Redesigned App Control Panel: “A central place for people to see and manage the apps they use.“

The ability to signup for new apps without having to share all of my personal information is an option I have been looking for some time. App developers have a year to utilize this new feature so we will see this rolling out soon.

The last topic we discussed was Facebook Pages. I not only have a Facebook page for TechMamas but also manage some Facebook pages (and ad campaigns)  for clients so this is an area of great interest to me. At the same time, there is so much information to cover on this topic that I decided to split it up to be covered in my next post on Facebook Pages (so keep an eye out for that post coming out soon!).

At the end of the event we had a tour of the Facebook Campus and could not help but have some fun in the Facebook store with fellow parenting journalists – including Jessica Rosenberg who helped me model some fun tee shirts!