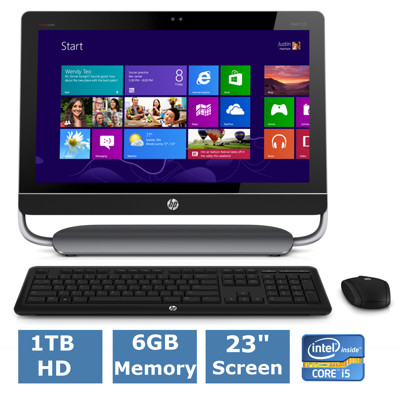 In my last HP Envy 23 TouchSmart All in One post I did the unboxing showing how easy it was to set up. As we started using it over the next few weeks, our family fell in love with having such an amazing touch screen computer in the family room. Of course I could not wait to take a look at the Windows 8 store to personalize my start up screen with Windows 8 apps.  Luckily the HP Envy 23 TouchSmart AiO comes with some basic Windows 8 apps loaded but there are many you can add depending on what your interests are. Some of the apps I installed are music apps including I heart Radio and Slacker Radio (rocking out thanks to the HP Beats Audio), games including Angry Birds Space, puzzles and even archery , watching movies on apps such as Netflix, search such as Bing, Educational apps such as Kahn Academy, news apps such as News Bento,  Reading books with apps such as Kindle. recipe apps such as Foodily and many apps to create content and communication.

In the video below I discussed some of the Windows 8 apps I was able to use because of the HP Envy 23 TouchSmart’s high resolution screen, 10 point touch, Beats Audio speakers and processing power that makes those Angry Birds fly. Or at least I would like to think that it is my Angry Birds skill that makes them fly!


My next fun projects to test out will be the camera app to make videos, photo apps to edit photos and using the Skype app with the HP TrueVision HD Webcam to video chat with the grandparents.  I was having so much fun I forgot about loading my social networking apps to take advantage of the people hub and calender apps.

Have you tried Windows 8 apps on a touchscreen yet? If so – which ones do you like? I am looking for new apps to play with on my HP Envy 23 Touchsmart All in One!

***Disclosure: I wrote this review while participating in a program on behalf of HP and received an ENVY 23 TouchSmart AiO as a thank you for participation. All my words are my own.