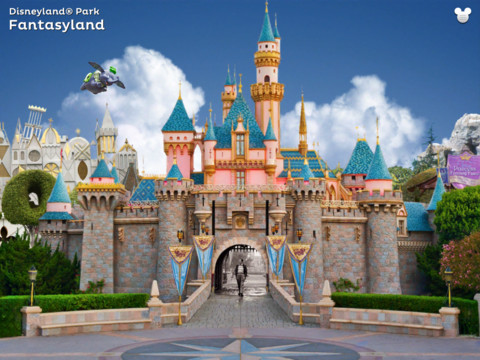 Part of the excitement of our family adventures to Disneyland is going online to plan our trip. Our kids love helping to collaborate so we can fit in all of their favorite Disney experiences in the trip. The Disneyland mobile apps are also helpful for us to get information on the go.

When I received this press release about a new Disney Parks app for the iPad, I was excited for a new mobile opportunity to experience and get information about Disneyland. Disney Explorer is a free app for the iPad that offers a mobile experience of the sights and sounds of Disneyland. The app offers the ability to “tap beautiful images, animation and interactive touch points that represent experiences inside Disneyland park, Disney California Adventure park, Downtown Disney District and all three hotels of the Disneyland Resort. ” I can’t wait to try it – but showing it to my boys will make it harder for us to wait until our next trip to Disneyland.

Take a Spin Around The Happiest App on Earth!

ANAHEIM, Calif. (Feb. 2, 2012) – The magical sights and sounds of Disneyland Resort can now be discovered with “Disneyland Explorer,” the official Disney Parks App available for iPad. The free app invites parents and kids to explore some of the many thrilling and whimsical experiences that can be found at Disneyland Resort, a premiere, multi-day, family vacation destination in Southern California.

With “Disneyland Explorer,” users can swipe their way from Pirates of the Caribbean to “World of Color” to themed suites at the Disneyland Hotel, discovering more than 100 exciting things to see and do across the resort. Users tap beautiful images, animation and interactive touch points that represent experiences inside Disneyland park, Disney California Adventure park, Downtown Disney District and all three hotels of the Disneyland Resort.

Touch points within the photo-realistic carousel reveal photos, videos and special activities inspired by classic attractions and entertainment.  As users explore the Resort, day changes to night with spectacular colors, lights, and fireworks.

Animations are triggered as users scroll through the parks, hotels and Downtown Disney District, revealing surprises such as Dumbo in flight above Sleeping Beauty Castle. Users  discover items that are both fun and historical, from the Mad Hatter popping out of a tea cup to vintage video of Walt Disney dedicating Disneyland.

About the Disneyland Resort