My platform of choice during the Traveling Geeks 09 trip to Paris was first Twitter to microblog, then loading the microblog items to a blog post (my blogging platform is Typepad). Twitter is an application that allows people to share what they are doing at the moment in 140 characters or less. My niche on Twitter is to share parenting and technology updates, so this information would fit within my framework.  At LeWeb I learned about Seesmic so I hope to try that out as an interface for my next microblogging adventure. I will also be experimenting with using the BlackBerry app for Whrrl to capture “stories” on the run.

I purchased an AT&T 200 MB International data plan for my BlackBerry Bold in preparation for microblogging in Paris, using my own daily calculations to make sure I would not go over (which is very expensive). All of this preparation would allow me to enjoy the tour, capturing the key moments while not taking too much time away to prepare blog posts until I returned home. Although microblogging does now allow in-depth analysis, it does capture the key points.

The International Data plan also helped me keep my smartphone email and social media app. addiction satisfied during my trip to Paris. The thought of a smartphone without a data plan was too much to handle.

Here is my Twitter Stream from the  #TG09 Traveling Geeks 09 trip to Paris. Each tweet is from my Twitter stream unless it has a “RT” or retweet in front of it. I took out my Twitter ID (TechMama) and hashtags after the first few to make it easier to read. 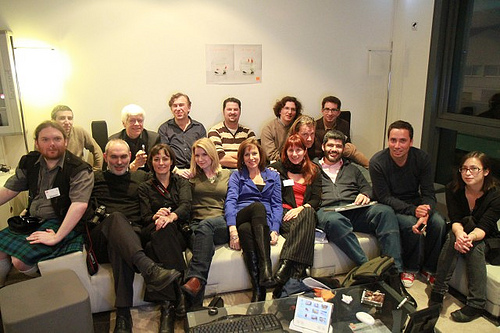 As I said in my post about global “geek” language, we had a dream team of geeks on the trip: Renee Blodgett, Matthew Buckland, Amanda Coolong, Kim-Mai Cutler, Olivier Ezratty, Eliane Fiolet, Tom Foremski, Phil Jeudy, Frederic Lardinois,  Robert Scoble , Sky Schuyler, Rodrigo Sepulveda Schulz, David Spark, Ewan Spence, Jerome Tranié, and Robin Wauters. For full coverage of the Traveling Geeks Paris Tour 09 click over to the website. To follow the Traveling Geeks, there is a Facebook page and a Twitter list.  there is a I would have included more of the social banter that went on between the geeks, but I did not think it could be easily translated into 140 characters:

If we were not taking pictures, video, blogging, podcasting, microblogging, then we were talking about the gadgets we use to do that. If we were not talking about gadgets, then we were talking about the businesses or social media. We did all of this while walking all over the beautiful streets of Paris, at meetings or meet-ups, or running to and from the Paris Metro. But it was on the Paris Metro – that an stylish elderly French woman helped us understand that at times our laughing or conversation got too loud; she turned around to me on the Metro and said “Shhhhh” (international language for BE QUIET!).


The full agenda of LeWeb can be found here.  Olivier Ezratty posted with a summary of LeWeb2009 startups. Renee Blodgett, Eliane Fiolet and the other Traveling Geeks covered the startups with video and blog posts on the Traveling Geeks website.


While at Chicago airport waiting for my connecting flight back home to California, I called AT&T to see what the final number of data megabytes used in Paris was, hoping that I did stay within the 200 MB limit for the International data plan. I had great 3G coverage  (via my cell provider AT&T) on my phone all over Paris – better coverage then at my own house in California.  In the first few days I calculated that I used about 30MB per day on my BlackBerry Bold data plan for use of Twitters and email.  The final number that the AT&T customer service representative gave me for 5 days of Twittering and email in Paris was somehow exactly as I estimated: 153MB. Phew…

This post is written by Beth Blecherman of TechMamas.com. Reproduction of this article with permission only. This was a sponsored trip organized by the Traveling Geeks. Disclosure policy can be found on the Traveling Geeks website. Bitly short URL for this post: http://bit.ly/8as0ZQ